This is the first proper JRPG I ever played (back in 2008) -- and LOVED it ... even though it was in Japanese (the English version wasn't released yet). While I managed to get through a good part of the story/ game, I didn't finish it cos neither did I understand the ins and outs of RPGs then (doh!), nor what was really going on, well, not enough knowledge of the language to complete the game (I don't think I was strong enough to tackle either Genesis or Sephiroth).

Fast forward to present day; I'm quite an expert in the genre (having played so many since then) and -- hurrah -- the English version of the game has been out for years. I was actually given a copy but for some stupid reason, I sold it (after I gave my old PSP, Dissidia special edition, for the first generation Vita). I've always wanted to replay Crisis Core but it'd have meant getting myself and old PSP, which I didn't wan to do... 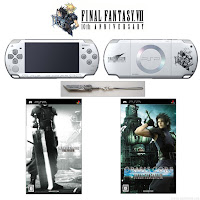 Until I saw an (unused) Crisis Core special/limited 10th anniversary bundled edition on sale on eBay (like, I had an OMG moment) and for around US$350 including shipment/postage ... which, seriously, is a bargain. Another seller offered the same thing for US$750 (!) but I noticed that has now been sold too. These editions are hard to come buy (even on eBay) so I ordered it straightaway ... I think it makes more sense to get a special edition than, say, get an ordinary (old) PSP and the game separately. Anyway, it wasn't all smooth sailing. When the game arrived - sure, it's spanking new as promised - but the battery had already expired (it was bloated, in fact) and after I bought a new battery for it, the screen kinda quickly died. Thankfully, this city being, well, this city, I could get that fixed pretty quickly (and hour!) so have been playing the game for a couple of days. The beauty of it wall is that I actually started playing the game some weeks ago, after a friend lent it to me, and I successfully transferred the (digital) save onto my new machine. So a happy ending!

Now that I know how to play the game properly, I can beat that horrible axe-wielding Vajradhara monster quite quickly (boy, did that thing used to give me much grief!!!) by dodging and spamming Blizzaga *LOL*  I have also completed as many side missions (300+ in total) as poss. at this stage (Chapter 5, half way through the game) and got my Zack to Level 29. That's the thing, levelling in this game is all a bit random but I hope I'm just slightly over-levelled, while my "DMW" (digital mind wave) is in "sky high" at the moment, good to get back into story mode (to meet Cloud ~ yeah!) Doing the missions can be quite tedious, especially when you stumble into those random battles all the time >< but some of the items are quite worth it. But over all, I think I missed playing such a fun Final Fantasy game!!! I mean, FF X-2 was fun with the dressphere and stuff but I think by the time I unlocked all the mascots, I started to lose interest in the gameplay ... and the game is so full of missables that I just got tired following the YouTube playthrough. And it's in Japanese.

With Crisis Core, I like the randomness of that DMW wheel and its challenging battle system (non turn-based). Oh, this is Hajime Tabata's first PSP title and I've since played his Third Birthday as well as FF Type-0 ... I think he's quite a genius, always introducing something fun in his games. The story of Crisis Core is also excellent - great characters such as The Turks - so I'm really looking forward to completing the game this time round. And I think I'll just play this game on the special edition... it deserves to be special!!!
Posted by Monday Morning With... at 9:49 AM No comments:

Yes, truly incredible that I'm still playing this. There are some hidden Phantom Beasts hidden in the last chapter (second playthrough only) so I'll have to trudge through the entire game just to unlock them. Crazy. The completist in me just wouldn't let that go! Meanwhile, I'm also slowly making my way through Super Robot Wars Z3 Tengoku-hen, which is a great turn-based tactic/ strategy game but since everything is in Japanese I need to find out which robot does what best, through trial-and-error. And that is a laborious process. A friend will lend me his PSP and Crisis Core: Final Fantasy VII so this time I wanna finish that game (like, I really know how to play a RPG!)

Anyway, back to Ao, I just got the rarest fish in the game but it matters little now since I don't need that to exchange for any rare accessories... I have so much mira (dosh) now I can just buy it outright. And my team is pretty OP now. Lloyd has evasion close to 90 per cent, while Randy is another tank. Tio replaces Wazy as the mage and Ellie (now my fav) is the healer with many time tricks up her sleeves. The thing is it's getting quite tedious to speed skip all the dialogues I think I will take a break. Nightmare more in second playthrough is totally manageable...

Elsewhere, Have bought the Danger Hiptop Side id on eBay. I actually wanted to get this ages ago but wasn't sure it would work here since it's a dual band (850/1900 MHz) US phone. But I think my service provider actually offers 1900 so we'll see. It costs next to nothing now... and am surprised I could find it still on eBay!
Posted by Monday Morning With... at 5:03 PM No comments:

Monday Morning with a Twit

Flavour of the Week -- Top Ten